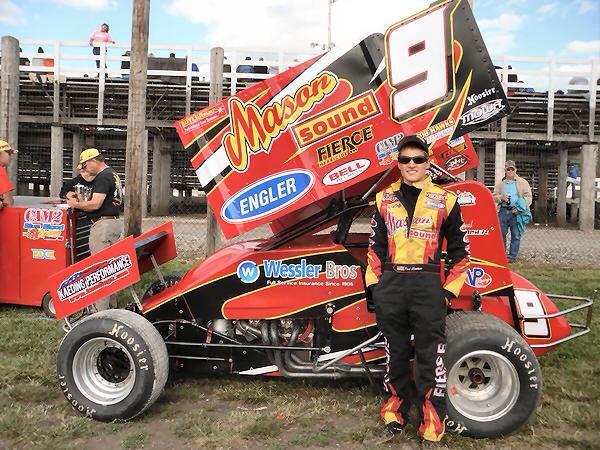 (Bill W) March 30, 2013 – Sixteen year old Paul Nienhiser took to the track in a 360 for the first time, but looked like a veteran at the DOC 360 Frostbuster opener for the Brockway Mechanical & Roofing Sprint Invaders at 34 Raceway in West Burlington, Iowa Saturday. The youngster put on a clean sweep of his heat, the Dash and led all 25 laps in the main event.

Nienhiser, aboard the Mason Sound #9 sprinter, enlisted the help of fellow driver, Joey Moughan, as crew chief for the night. He utilized the same Claxton power plant that Moughan used to a win of his own at the speedway last season. It proved a winning combination.

Nienhiser streaked by front row starters, Bret Tripplett and Jon Agan on the first circuit. Agan settled in behind. With two laps complete, Tripplett tried to make a pass to the low side of Agan and contacted the Dee Zee #4, upending both cars. In turn three, Dave Getchell tipped over as well.

It would prove to be the final stoppage before the checkers. Nienhiser led going back to green flag racing, ahead of Scotty Thiel, Bobby Mincer, Josh Schneiderman and Russ Hall. Soon the fans eyes turned towards Matt Krieger, who started the event 14th. Shortly after the restart, he used the high side on a choppy cushion to jet into the top five.

Krieger disposed of Hall, Mincer and then Schneiderman to move into third. Meanwhile, up front, Nienhiser was navigating lapped traffic. Thiel came within a few car lengths on a pair of occasions. Slowly Krieger reeled in Thiel and passed him for second with five to go. Thiel would come back, however, and the two would duel to the end. Coming into turn three on the final lap, Krieger got over the cushion and was sucked into the wall ending his night.

Nienhiser had taken the checkers by then with Thiel in tow. Reverting back to the last completed lap, Schneiderman, Hall and Alan Ambers rounded out the top five. Hard-charger Ryan Jamison, Mincer, Tony Shilling, Krieger and Mike Houseman Jr. completed the top ten.

“On the way up here, Joey (Moughan) was saying how much he likes this place,” said Nienhiser in Victory Lane. “I kind of like it too! We are planning on running with the Sprint Invaders this year, and we’re looking forward to it.”

“We had a good car at the end,” said second place Thiel. “I was a little leery about turn three. I drove underneath it and it worked. Maybe I could have driven it a little harder and made it happen. I’m kicking myself a little bit for that. (Krieger) gave me the encouragement to try up top, but by then we were short of laps. I’m not sure what happened to him at the end.”

Josh Schneiderman explained his third place run. “It’s a good way to start the season. We had a great race (with Hall). With probably about ten to go, we lost the brakes. The car was a bit on the snug side, so I really needed them to turn the car. With five or six to go, I was just trying to hold on.”

Next week marks a doubleheader for the Sprint Invaders. On Friday, they will head to the Lee County Speedway in Donnellson, Iowa before venturing up to the quarter-mile Davenport Speedway on Saturday.