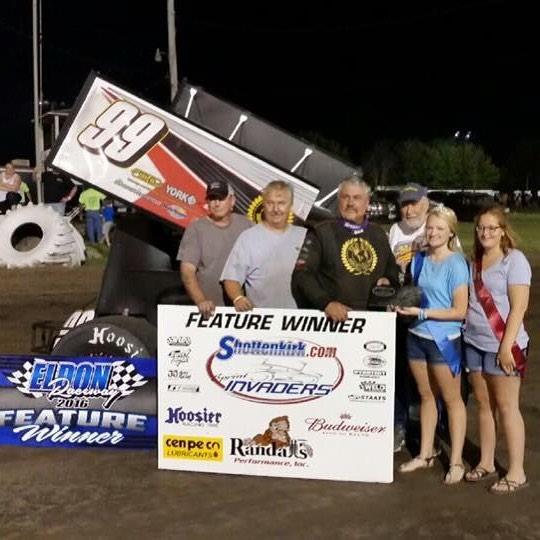 John Schulz won an entertaining feature Tuesday night with the Shottenkirk.com Sprint Invaders. He out-dueled his nephew Josh Schneiderman at the Dubuque County Fairgrounds Speedway. The feature saw a number of slide jobs between the two for the lead on the banked 3/8-mile oval. Schulz earned $2,000 for his win aboard the Jimmy Davies Racing #99.

Schulz grabbed the lead by an eyelash when the first of 25 laps was completed, ahead of Josh Schneiderman and series’ point leader, Chris Martin. Josh and Schulz exchanged the lead several times over the next few laps before Josh took control.

A caution for a spun Rob Weuve slowed things with seven laps in the books. Schulz slid in front of Schneiderman on the restart and gained a narrow advantage at the stripe. One more lap was complete before Travis Porter spun into the infield. At the same time, Ryan Jamison, who had been using the low side to climb into a battle for third, retired with a motor issue.

The restart saw Schulz leading Schneiderman, Martin, Jacob Glasgow and Jarrod Schneiderman. Josh slid in front of Schulz in both turn two and turn four when the green fell, but Schulz was able to power back by each time. With fifteen laps counted, Weuve again spun, ending his night.

The final restart gave Josh the opportunity he needed. He slid by Schulz, but left him enough room to skate between him and the wall coming off of two. Schulz would maintain his lead for his twelfth career win with the Sprint Invaders ahead of Josh, Martin, Jarrod Schneiderman and Cody Wehrle. Hard-charger Damian Getchell, Harold Pohren, Glasgow, Tim Moore and Bob Weuve rounded out the top ten. The Schneiderman brothers and Schulz were heat race winners, while Josh Schneiderman won the Dash.

“I didn’t get a good start on the first try,” said Schulz afterwards. “The second time I knew what I did wrong and I got right to second. I knew my nephew Josh was fastest in the heat race. We traded slide jobs the first few laps and I told myself to knock it off. I thought traffic would play a part. With the caution about seven laps in, I got a whale of a start and I knew we were pretty good. Once I got out front, it was about keeping it out of the fence. The cushion was definitely the place to be. This is our backup car and motor and it was rolling around there super. When I raced him clean the first few laps, he did the same for me later in the race. He’s been running really good the last few weeks at Knoxville. I’m really proud of those two nephews. They’re really coming into their own. This is a great facility and a great track. It was slick, but when you can run that hard and that well, it’s great. I hope we can come back.”

“I’m as disappointed after a race as maybe I’ve ever been,” said Josh Schneiderman. “We didn’t need that caution (on lap eight). We had the preferred line back by John. If I have to get beat, I’m glad it’s by family, but this one hurts pretty bad. Not only are we family, but I consider us both really clean racecar drivers. We probably wouldn’t have been nice to anyone else, but we were both trying to give each other room. My guys are working their tails off and I wanted to give them a win tonight. It just wasn’t meant to be. John drove a heck of a race and had a great racecar. He was better on the short runs, but once we got on the longer runs, we actually reeled him in. Unfortunately, there was a lapped car on the bottom, and we couldn’t give him one last go of it.”

“We ran here last year, but we didn’t have near as good a car as we did this year,” said Martin. “Overall, it was a really good night. We were very aggressive on the start of the heat, which got us in the Dash. I feel like we did the best we could, and we’ll do it again next week. The track was a little tricky. We don’t get many opportunities to run up on the wall, so it was definitely a big learning curve for me. I really enjoyed it, and hopefully, we’ll get to do it again.”