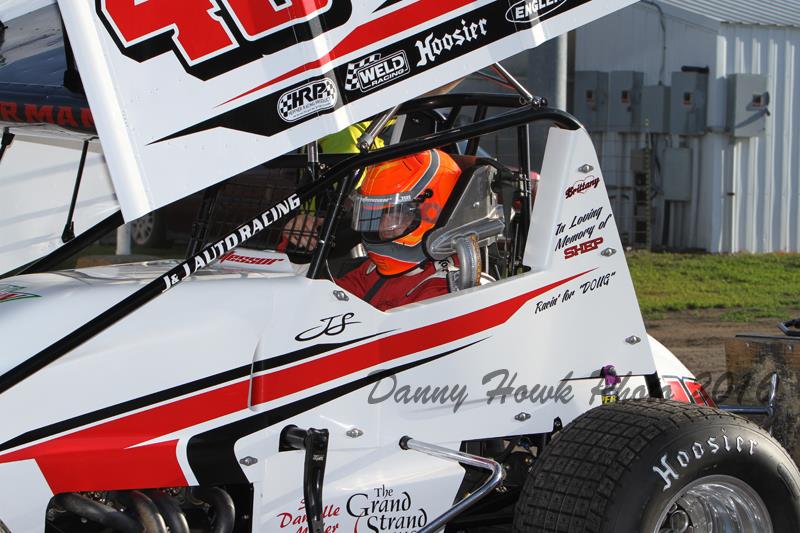 Josh Scheiderman and the Deuce Motorsports #49 team racked up another top ten with the Sprint Invaders Sunday night at Quincy Raceways in Illinois. The slick track conditions turned in an exciting non-stop 25-lap feature that saw the West Burlington, Iowa driver finish seventh. This weekend, the team will put the 410 in and compete with the MOWA series at the Herb Barlow Memorial in Jacksonville, Illinois Friday and the Tom Knowles Memorial at Spoon River Speedway Saturday.

Josh drove from third to finish second and qualify for the Dash in his nine-car heat race. “We’re drawing a good car count here late in the year,” he says. “So we were happy to make the Dash, especially because of the nature of that track. It gets really slick, and track position is important.”

He started on the pole of the Dash, but a mistake cost him a few spots. “It was like an ice skating rink,” says Josh. “We fell in behind Robbie Standridge, but I tried a little too hard on the second lap and got into that berm on the top. The car took a hard push, and we allowed a couple cars by us. We know the Dash doesn’t win the feature for you. Unfortunately, the Dash draw seems to kill us every night, and the draw saw us starting sixth (in the feature).”

Josh maintained in the feature, checkering seventh. “We anticipated the track laying rubber,” he says. “I don’t know that it laid rubber at all to be honest. We were really pretty good in the feature. Everyone caught on to run the bottom of three and four early. I moved down there as well. That wore out eventually. I probably should have been up top. I may have been able to get by some cars up there.”

The team will chalk the laps up to their experience with the slick conditions. “We were good, but we weren’t great,” says Josh. “We don’t get to many slick race tracks like that. Some of our setups…we’re still working on them. It’s great experience for us, and we’re excited to get to the next one and work on it again.”

Josh is gearing up for this weekend’s shows in Illinois. “We definitely have our 410 program headed in the right direction,” he says. “We’ll probably see some slick racetracks again this weekend. We’re excited to get a couple of shows in this weekend with the MOWA series.”