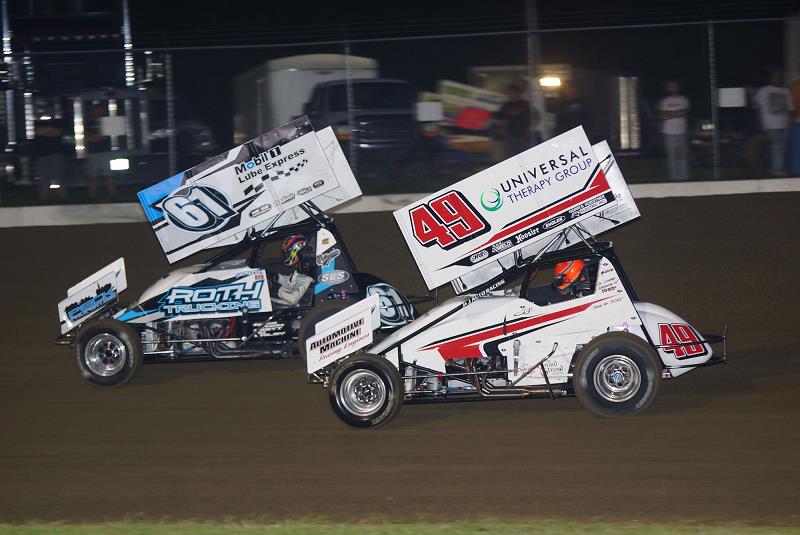 Josh Schneiderman- In the Family!

Josh Schneiderman and the Deuce Motorsports #49 put on another one of their patented charges last Saturday night with the Sprint Invaders at 34 Raceway in West Burlington, Iowa. Going from twelfth to third, Josh not only finished strong with the series, but saw his brother Jarrod win his first ever Sprint Invaders feature. The team is weighing remaining races on their schedule, or whether they will call it a year.

Josh drew a sixth starting spot in his heat. “We didn’t get what we needed from the draw, and the track was still awful fast in the heat race,” he says. “That made it tough for passing. It is what it is. You win some and you lose some on the draw. We didn’t get quite the start we needed in the heat either. We got held up a little bit in turn one. It was just tough passing. That’s just how it goes sometimes.”

He finished fourth in the heat, putting him outside row six for the feature. The track was fast, but widened out as the night progressed. “The track became pretty racy,” says Josh. “It got hairy in lapped traffic. They were battling back and forth too. We had a good racecar, but we lost the brakes there about halfway through the race. That made it tough for us.”

A red was displayed with seven laps to go. “We needed that caution earlier,” says Josh. “It seems that we haven’t had a lot of cautions in races lately. The track was a little faster, and we got up to third…so we were really happy with a podium finish there.”
Josh was excited to see his brother get his first Sprint Invaders. win. “I was happy for Jarrod,” he says. “He’d been trying to win one with the Invaders for a long time. He earned that one. That was good for him.”

The strength of the team’s schedule came in 410 action at Knoxville. It was a year that saw steady improvement and Josh’s first podium finish at the Sprint Car Capital. “We didn’t have a lot of flash and flare, so I don’t know that we were on a whole lot of people’s radar,” he says. “But we were consistent all year. We had a bunch of top tens and a few top fives at Knoxville as we continue to build this program. We’re just so pumped for that. That’s big for us.”

The season saw a number of feature charges. “We didn’t start up front very often,” says Josh. “Obviously, we struggled a bit in qualifying. But when you charge towards the front in the features, it tells you that you are good when it matters. So the focal point of the offseason is improving in time trials. If we can get in those first three rows at Knoxville, I truly believe we can win.”