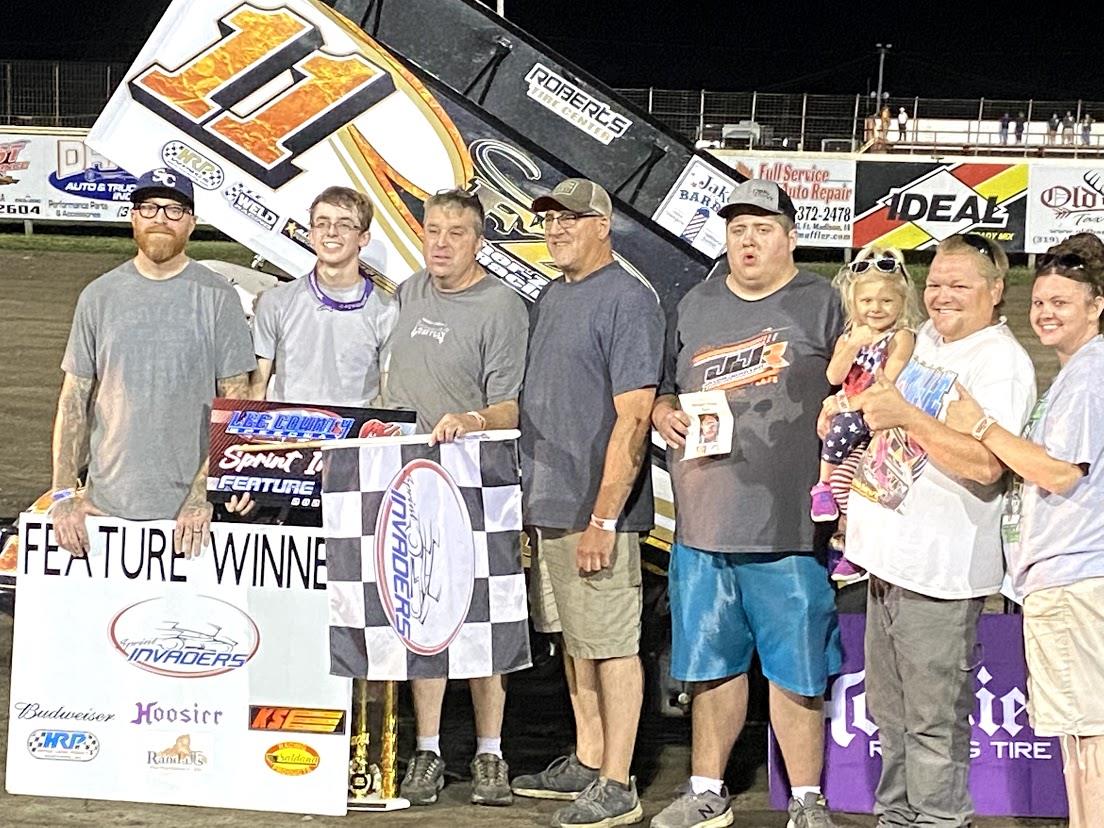 Jonathan Cornell shot out to an early lead in the 25-lap feature over Fisher, Tanner Gebhardt, Kaley Gharst and Paul Nienhiser. As the leader approached lapped traffic, Noah Samuel came to a stop five laps in, bringing a caution. Gharst grabbed third from Gebhardt on the restart, but Cornell pulled away again.

When a cone was knocked on the track to bring the second and final caution with nine laps down, Cornell was just about to enter traffic again. The lead four cars were Cornell, Fisher, Gharst and Nienhiser on the restart and they rode nose to tail on the cushion as they separated a bit from the field.

Cornell entered traffic with ten to go. While the leaders rode the cushion, most of the lappers were running low. With five laps to go, Cornell found himself behind a pair of cars side by side, and hesitated for a second in turn three. Fisher put a slider on that cleared both a lapped car and Cornell.

Fisher slid to the cushion and led the lap, and began to pull away in heavy lapped traffic. Gharst would vie for the second spot, taking it briefly at the white flag, but Cornell would nail it down on the last lap.

“Man I don’t know what to say,” said an excited Fisher after climbing down from the top of his car. “I’ve been working so hard for this! I knew the top was going to be the way around. I just stuck to it. Cornell made a mistake when he got into lapped traffic. I took a shot, and it worked, so I’m stoked. I just want to thank everyone who helps us.”

“(Fisher) has been getting real good and fast,” said Cornell. “You can’t take anyone on this circuit lightly. I just got a little conservative out front. A lot of drivers say it’s better to be in second than first on the closing laps, he maybe could test his aggressiveness going into the corner a little better than I could. I was getting a little stale up there. A lapped car got a little sideways in front of me, and (Fisher) did an excellent job getting by us. It was a close exciting race, and congratulations to him.”

“We were still a little off with the car in the feature, but we were a lot better than we’ve been this year,” said Gharst. “We needed traffic a little bit sooner after drawing the five (after winning the dash). In the end, we didn’t move off the top. They said there was a little rubber on the bottom, but we didn’t have the traffic to move around. We’ll take third.”

The Sprint Invaders next action will be Saturday, September 25 at the 34 Raceway in West Burlington, Iowa for the $5,000 to win “Fall Haul.” The series will also have a $2500 to win non-point event Sunday, September 26 at the East Moline Speedway in East Moline, Illinois. For more information on the Sprint Invaders, visit www.SprintInvaders.org or look us up on Facebook.