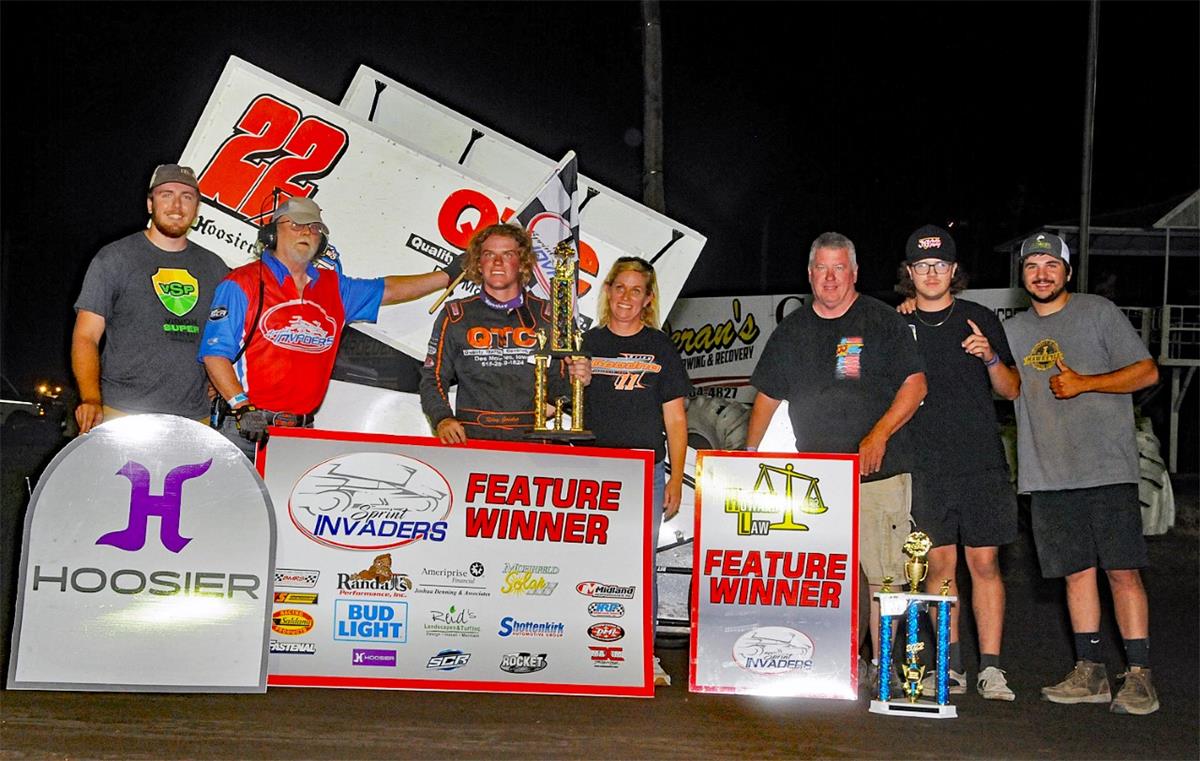 (Bill W) Eldon, IA, June 16, 2022 – Riley Goodno drove to a clean sweep in his first ever Sprint Invaders win Thursday night as part of the Jerry Sloan Memorial at the Eldon Raceway during the Wapello County Fair. The Knoxville, Iowa native’s win was worth $2,000 aboard the family’s #22. The win was hard earned after a long night, coming around 1:00 a.m.

Bret Tripplett led the field early from his pole position, ahead of Kaley Gharst, Cam Martin, Goodno and Ryan Jamison. Only one lap was in the books when Steve Pumphrey spun in turn four. Paul Nienhiser moved into the top five on the restart, before Colton Fisher caught an infield tire in turn two and flipped hard. He was uninjured.

Goodno shot by Martin for third on that restart in a good battle. A lap later, something broke on the second place car of Gharst, causing him to helicopter in the air. Martin stuck him with nowhere to go. Fortunately, no one was hurt. Now Tripplett lead Goodno, Nienhiser, Jamison and Devin Wignall back to green.

Goodno used the restart to get by Tripplett, with Nienhiser on their tails. By the halfway point, the three were in close proximity and dicing in traffic. Tyler Lee stopped on the backstretch at that point, clearing things for the leaders.

Goodno retained his spot as he approached traffic again with four to go. He hesitated behind the lapped car of Aidan Zoutte. Tripplett climbed his right rear and flipped hard in turn three. He was unhurt.

From there, Goodno pulled away to win it ahead of Nienhiser. Cody Wehrle made a late charge for third, ahead of Jamison and Wignall. Jamie Ball, Tanner Gebhardt, Austin Miller, Dugan Thye and Chase Richards rounded out the top ten. Goodno won his heat and the Dash. Terry McCarl, Cam Martin and Nienhiser won the other heats. Chris Martin started on the pole of the Dash, and struck an infield tire on the first lap, collecting McCarl. He was unable to start, while McCarl started and parked in the main event.

“My car really good on the bottom of one and two,” said Goodno in Victory Lane. “I was able to pick off cars there and then keep my momentum up in three and four. That was a long race. I struggled to get past lapped cars. I could never get to them at the right time and just drive by them. I was checking up, and letting them get close to me there.”

“I hate running second, but half-miles aren’t really my cup of tea,” said Nienhiser. “I don’t get too many chances to run them. I told Scott (Bonar) I really didn’t think I ran that good of a race from the driver’s seat, but we survived and dodged a couple accidents. A second place isn’t anything to hang your head about, so we’ll take it.”

“The restarts the whole race, was really where we were making our hay,” said Wehrle, who earned hard-charger honors. “I don’t really know what it was. We really weren’t doing anything special. I enjoyed the cautions and restarts, but the waiting kind of was getting to me. I’m happy. We’ve been fighting some fuel issues so we’ll take a third from the seventh row.”

The Sprint Invaders next action will be Friday, June 24 at the Davenport Speedway quarter-mile and at the 34 Raceway in West Burlington, Iowa on Saturday, June 25. For more information on the Sprint Invaders, visit www.SprintInvaders.org or look us up on Facebook.