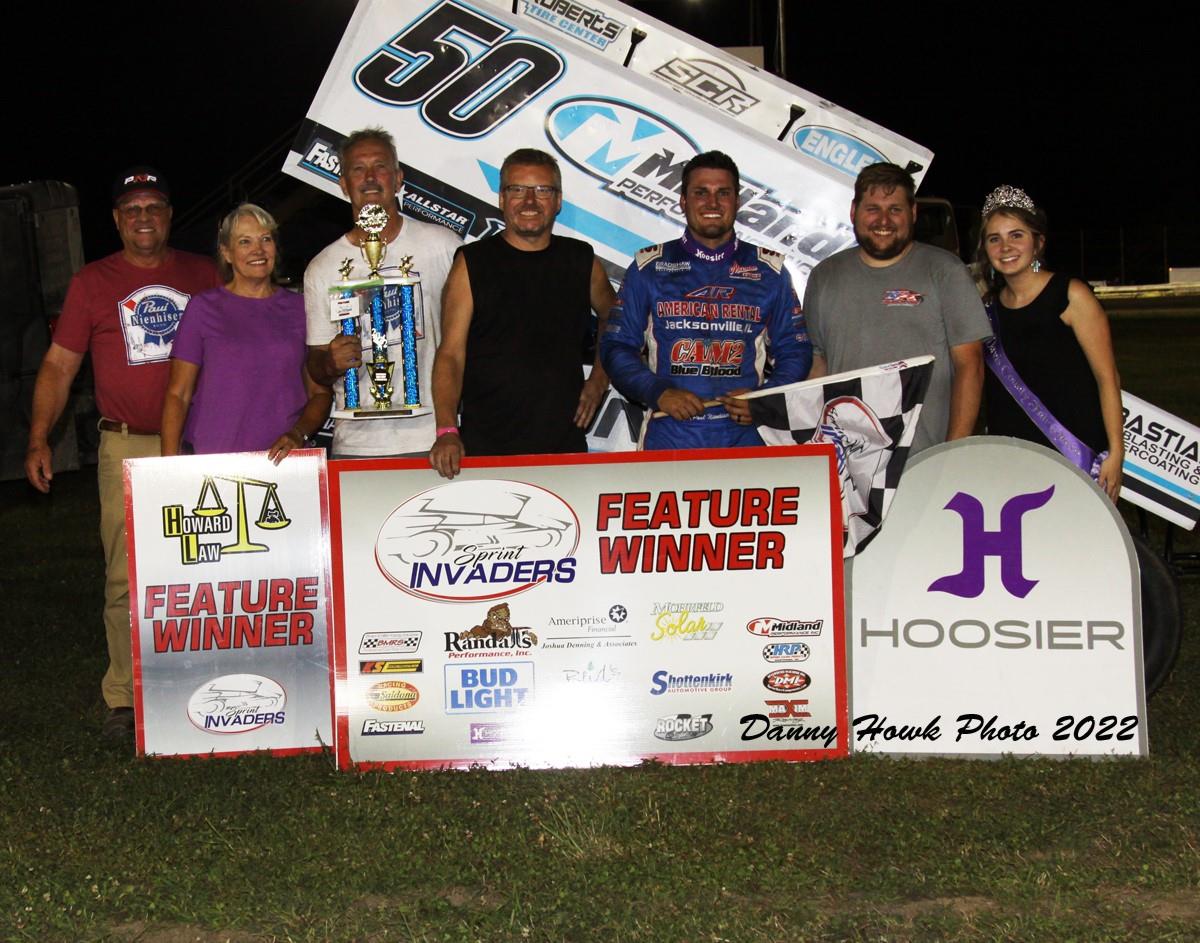 (Bill W) Bloomfield, IA, July 14, 2022 – Paul Nienhiser has had a habit of finishing second with the Sprint Invaders in 2022, and he broke that nuisance, with a win Thursday at the Bloomfield Speedway on the Davis County Fairgrounds in Bloomfield, Iowa. The win paid the Chapin, Illinois driver and Midland Performance #50 car owner Scott Bonar $2,000.

Nienhiser broke out to an early advantage in the 25-lap main event from his starting spot outside of row one, ahead of Riley Goodno, Great Williamson and Chase Randall. Williamson used a low move in turn two to take second from Goodno on lap two. Randall followed him into third with a slider on lap three.

Chase Richards spun to bring a caution three laps in. Randall shot by Williamson on lap five for second. Matt Allen spun a lap later to bring another caution. Williamson saw Allen’s car sitting in turn four, and in quick evasive action, got into the wall and upside down. He was unhurt.

Nienhiser led Randall, Goodno, who inherited third, Chris Martin and Cody Wehrle back to green. Randall made a bid at the leader, momentarily sliding in front in turn two. Nienhiser was able to turn back under him, however, retaining his lead.

Martin passed Goodno for third on lap ten, and the leaders were into traffic by lap 14. With about ten laps to go, rubber appeared on the low side of the speedway, and Martin was one of the first to find it. He flew by Randall for the second spot with eight to go.

Nienhiser found the groove just in time, blocking Martin’s advance. Disaster struck for Martin with two to go, when his right rear tire blew. Nienhiser led the rest of the way in the green, white, checker, finish, winning ahead of Randall, Goodno, Wehrle and hard-charger JJ Hickle. Randy Martin, Bret Tripplett, Dugan Thye, Tanner Gebhardt and Colton Fisher rounded out the top ten. Williamson, Nienhiser and Martin won heats, while Goodno took the Dash. Jamie Ball claimed the B main. Jack Anderson was involved in a scary crash in his heat race. He was uninjured.

“I think the way the whole night played out, getting the lead early is what I wanted to do,” said Nienhiser in Victory Lane. “Sometimes I’d say I’d rather be running second, but not tonight. Every time we unloaded tonight we were pretty close to phenomenal, and getting closer to that. In the past weeks, we’ve been salvaging seconds, so tonight felt really good. Hats off to whoever was taking care of the track tonight for not racing here in the last year…though it took a little rubber at the end. I thought it was a very nice, wide surface, which we haven’t seen every night this year. It surprised me a little when Chase cleared me on the restart. It did give me the chance to dive back underneath him and get in front of him going into three. At that point, I concentrated on the lapped cars, getting by them and getting down before anyone behind me could.”

“We had a couple good starts,” said Randall. “Paul got a good launch in the corner, but I was able to get a really good slider into one. He was able to protect the best he could, and I wasn’t able to get back by him. It was a good race, and I’m glad we came home with another good run. Chris Martin got around me on the bottom. I sat on top one lap too late. I was really good on top the first half of the race. Once I moved down there, we were able to give Paul a run for his money.”

“It was a good run tonight,” said Goodno. “We just got this motor put in this week, and it ran fine tonight. It was good to start up front. I just wish we could have held it better. The track was definitely tricky. It was treacherous up against the wall there. I lost a spot trying to get by a lapped car, but was able to get that back.”