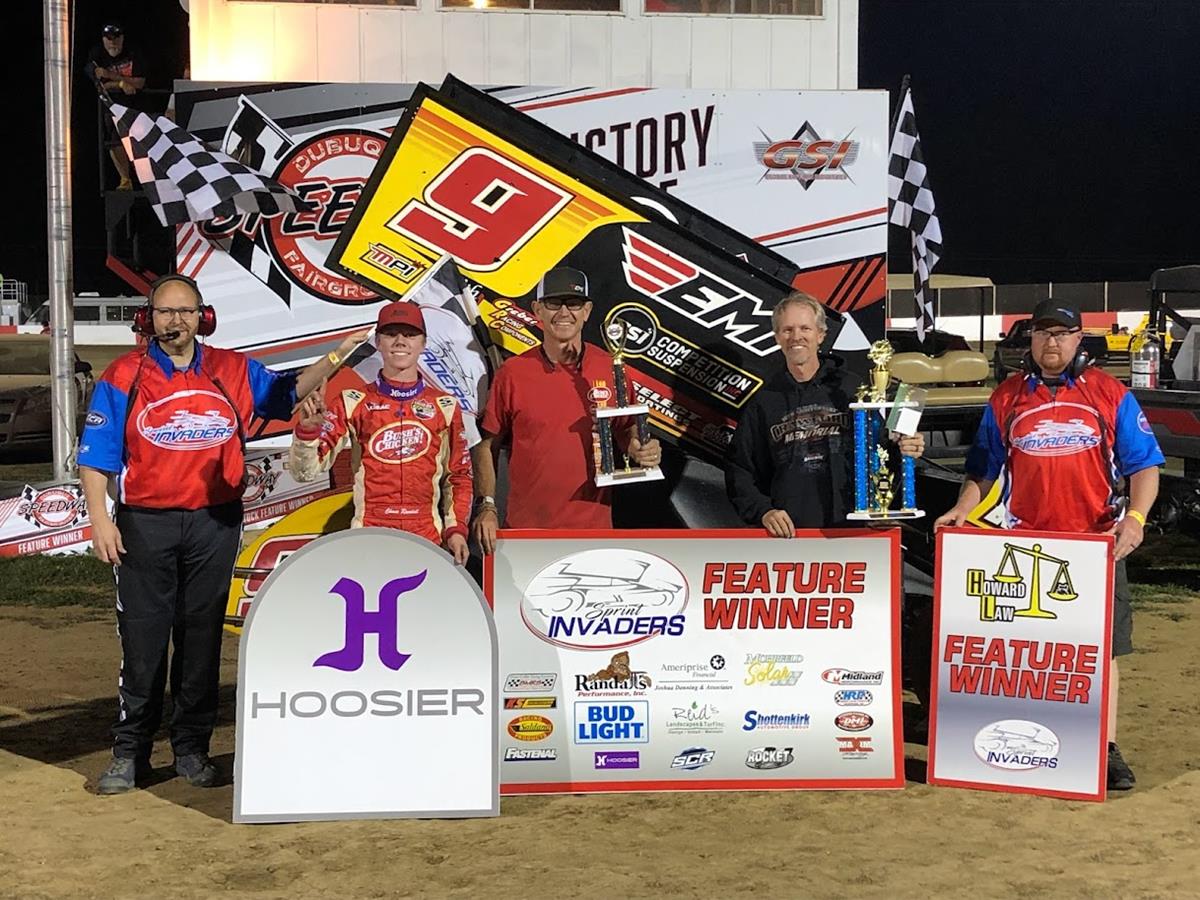 (Bill W) Dubuque, IA, July 27, 2022 – Chase Randall continued his winning ways with the Sprint Invaders Wednesday night at the Dubuque County Fair Speedway. The Waco, Texas driver had to earn his $2,000 payday, running the high reaches of the 1/3-mile bullring to perfection in another classic duel in Dubuque.

Scott Bogucki led early coming from row two in the Fossil Racing #26. Tanner Gebhardt, Jamie Ball and Randall followed. Randall quickly over took Ball for third, while Riley Goodno moved into the top four. On lap four, a Goodno pass of Randall was negated when Chase Richards spun to bring a caution.

Bogucki led the field back to green, but Richards slowed again to bring the caution. That was a break for Bogucki, who got off to a slow restart. Paul Nienhiser jumped up to fourth when green fell again, with Cody Wehrle also moving into the top five.

Randall hit the far high side of the track, sometimes making contact with the walls. On lap six, he passed Gebhardt for second, and Nienhiser followed him into third on lap eight.

Bogucki set the pace on the low side, but heard Randall challenging up high. The leader switched his line, going to the top on lap 13. Randall would slide under Bogucki to take the advantage. A lap later, Nienhiser used the high side to move past Bogucki into second.

On lap 16, Nienhiser stuck the bottom of one and two to pass Randall for the lead, only to have the move negated when Goodno slowed. With ten laps to go, Randall led Nienhiser, Bogucki, Gebhardt and Wehrle back to green.

Though Gebhardt and Bogucki exchanged third, Randall’s line around the wall carried his momentum to the checkers. Nienhiser finished second for the sixth time this season with the Sprint Invaders, and was followed by Bogucki, Wehrle and Gebhardt. Colton Fisher, Ball, Ryan Jamison, Tom Lenz and Devin Wignall rounded out the top ten. Bogucki, Goodno and Randall won heats. Bogucki also claimed the Dash.

“This is an awesome track,” said Randall in Victory Lane. “It was really good in the heats, with cushions on each end. I wasn’t really sure what the track prep would do for the feature, but it turned out really racy. It kind of slowed the top down to where the bottom could keep up. The bottom was really good, but I just had to run the top to keep my momentum up, and keep making speed. Paul showed his nose there right before the caution, and I had to figure out how to run one and two better.”

“We kind of fought a little bit of motor trouble since hot laps,” said Nienhiser. “We tried about everything we had in the trailer to fix that. We really couldn’t figure it out, so to start sixth and challenge for the win surprised me a little bit. Scott (Bonar) always has the car good. Being down a little power and the way the track was…my experience paid off there. The yellow came out at the worst time for us. I really needed to keep running in traffic.”

“We were good,” said Bogucki. “Everyone told me before it was going to be around the fence, or around the bottom. I was getting good drive off the corners, and within a lap, Chase went by me. Paul went by me on the bottom, and I went back there. That was no good either. We were sputtering fuel maybe the last five laps, but we were coming. It was too late by then. They did a great job. Wish I could have done better for the boys, but tonight we were third.”