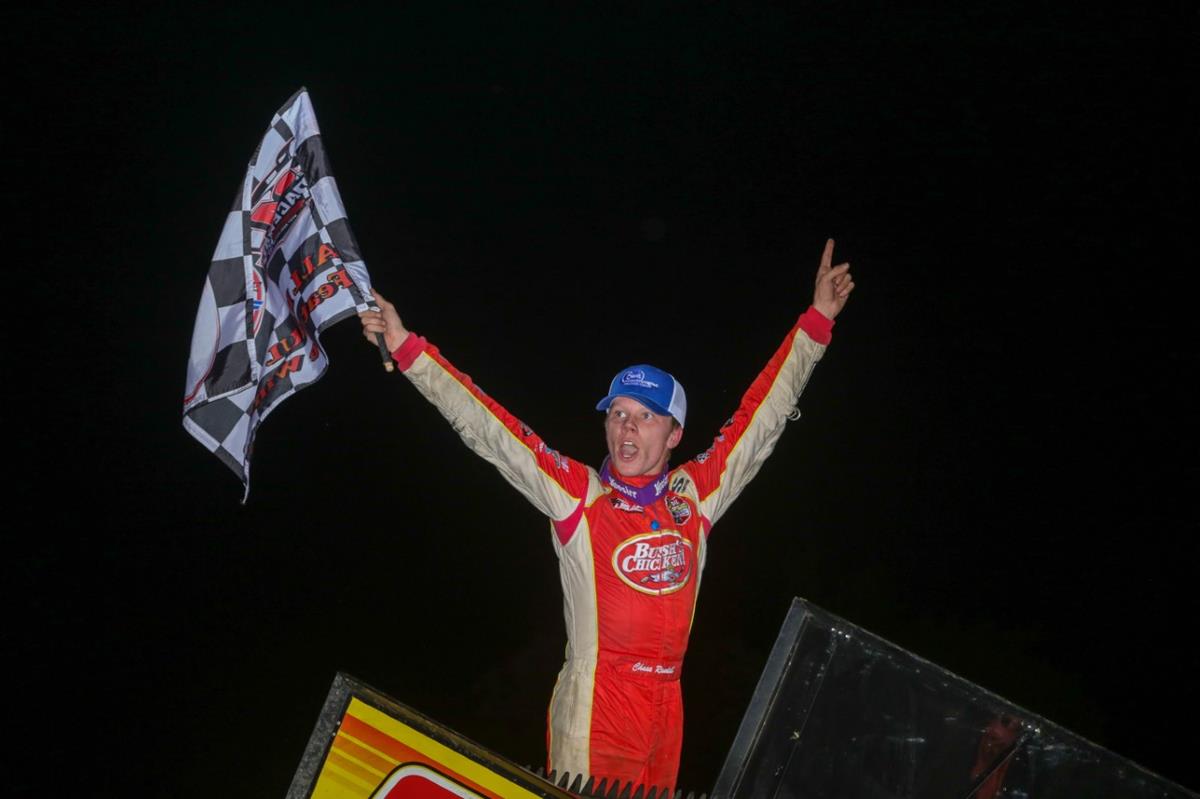 (Bill W) West Burlington, IA, September 25, 2022 – Chase Randall likes running with the Sprint Invaders! The Waco, Texas native won his sixth Sprint Invaders feature of the season on Saturday, and this one was his richest. With his clean sweep of 34 Raceway’s Fall Haul in West Burlington, Iowa, he took home over $5,200 with his heat, Dash and feature victories aboard the Bush’s Chicken, CSI Shocks #9.

The 30-lap main event proved to be on of attrition as it took four tries to get going. Veteran Randy Martin came to a stop on the first try, while Cody Wehrle, Nate Mills and Tyler Lee all suffered incidents in turns one and two on the second try and were eliminated. The third try saw a mid-field bump up between Terry McCarl, Devin Wignall, Joe Beaver, Jamie Ball and Devon Dobie. Only Wignall and Ball (sans nose wing) would continue.

Once the race resumed, Paul Nienhiser asserted himself by taking the point, followed by Randall, Davey Heskin, Bret Tripplett and Riley Goodno. The leaders were approaching lappers on the eighth circuit, when Nienhiser tried sliding by the lapped car of Chase Richards and making contact. The result was Richards getting upside down over turn one, and Nienhiser suffering a flat that ended his race. No one was hurt. Heskin, who was running behind Randall had to retire with a low tire of his own.

Randall assumed the lead now, ahead of Tripplett, Goodno and Carson McCarl. Once green, Chris Martin moved his way up to fourth, before Randall entered lappers again on lap 14. Martin claimed third from Goodno on lap 16, and Garet Williamson followed him a lap later into fourth.

On lap 19, Carson McCarl came to a stop in turn four. Williamson slid in front of Martin on the restart to take third, while Zach Daum used the low side to move into the top five. Carson McCarl spun with eight to go, collecting Ryan Jamison and ending both of their races.

Randall maintained his lead, while Williamson slid by Tripplett for the runner-up spot. Chris Martin moved into third, and Daum was fourth with six to go. Tripplett would end up fifth. Goodno, Colton Fisher, Luke Verardi, hard-charger and provisional Jamie Ball and Evan Martin rounded out the top ten. Plenty of contingencies from a number of sponsors padded wallets.

“It was unfortunate what happened to Paul there,” said Randall afterwards. “I think it would have been a good race between him and me. We were set up really good. I got to second early, and kind of just rode around to figure out where my car would work best. I found the top really good the whole way around, especially off of four. We got to lapped traffic early there. They were all over the place in front of us, we slid a car and Paul got together with the other car. That benefited us. We were able to get the lead and get out front. Clean air was very key. I’m glad to get another win here and 34, and I thank them for having us. It was a long race…nothing we could control. We finally got it going. It was a fun race after that, and I’m glad to be here.”