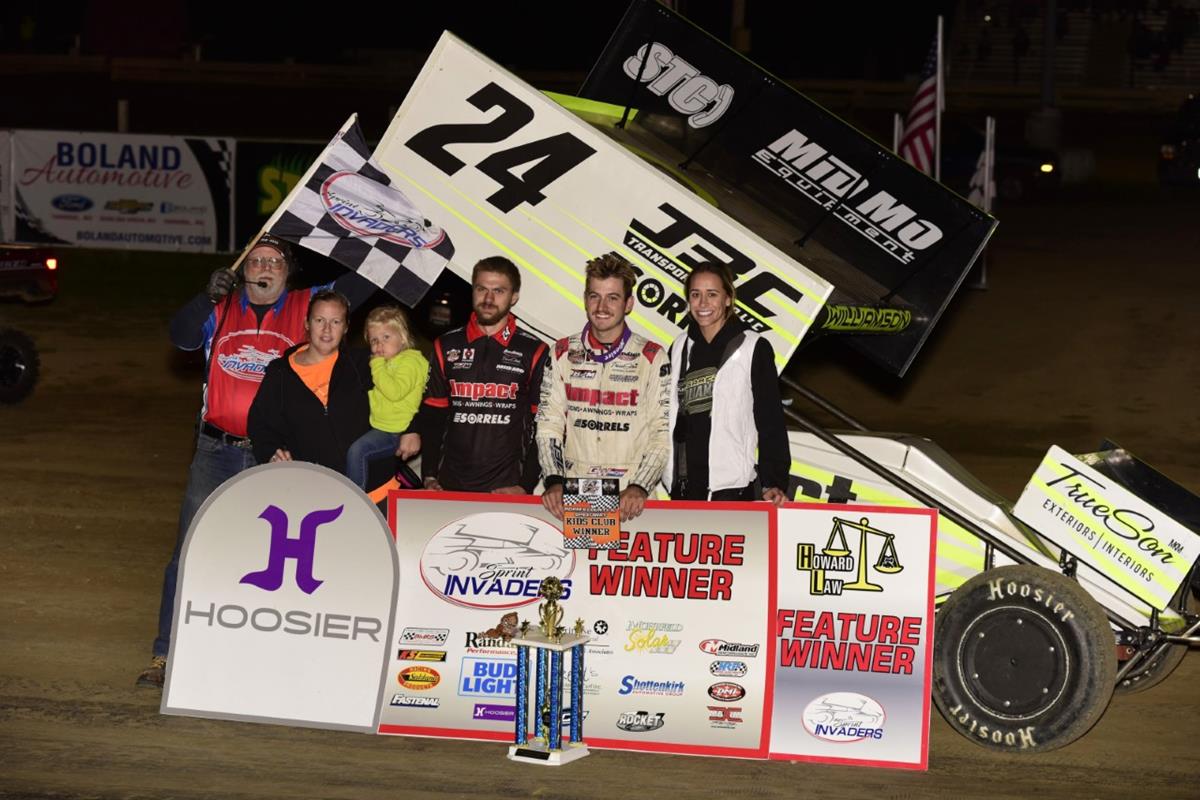 (Bill W) Quincy, IL, September 25, 2022 – Garet Williamson emerged victorious on a tricky track Sunday night at Adams County Illinois Speedway in Quincy. The Kingdom City, Missouri driver had to pass one of the hottest drivers in the series, but held on to win the $2,000 top prize. It was Williamson’s second career win with the Sprint Invaders, and first at Quincy.

Cody Wehrle nailed down the driver point championship for the series. Wehrle competed with a 305 under the hood loaned from Roger Grant to maintain his title. His first came in 2018. Scott Bonar, owner of the #50 piloted by Paul Nienhiser won the owner championship.

Williamson led the 25-lap main event at the outset, over Chris Martin and Paul Nienhiser. Nienhiser rode by Martin on lap two to take second. Three laps in, Chase Richards came to a stop to bring caution. On the restart, Nienhiser used the low side of turn four to take second, while Chase Randall claimed fourth from Austin Archdale.

Two laps later, Riley Goodno flipped over the tall cushion in turn three. He was uninjured. Randall used the restart to ride the cushion around Martin for second. He then did the same to Williamson to take the lead, before Richards stopped again, this time in turn four. Randall led Williamson, Martin, Nienhiser and Archdale back to green. Nienhiser used the high side to pass Martin for third, when the green fell again.

On lap ten, Williamson shot a slide job in front of Randall to reclaim the lead before Steven Russell spun on lap 12. Randall and Nieniser battled hard for second, which gave Williamson the time and space to build his lead. Nienhiser would grab second for good with ten to go.

Zach Daum was also on the move after starting in row five. He passed Martin for fourth with ten to go, and a lap later drove under Randall for third. With five to go, Cam Martin flipped over turn three to bring another red. He was unhurt. On the restart, Archdale, spun eliminating a great sixth place run for him. Randall and Daum would trade second again in the closing laps, but Chris Martin was coming too, and passed Randall late for fourth.

“They tried to wear us out on those restarts,” said Williamson in Victory Lane. “This has been a tiring year. We’ve had the ups and downs. This is one bad ass racetrack. This is a little gem. This is a lot of fun. I had no idea what to do (where to run on the track). Chase got by me and I thought it was over. I yanked the wing back, threw a slider, and it stuck. After that, I knew it would be won on the top. I knew I couldn’t make a mistake, and if I made a mistake I knew it would be over.”

“I could run the bottom to the middle in one and two and I just had to run the top in three and four,” said Daum. “When I got by Randall a little bit there, I noticed he was trying to peek on the bottom. I thought we could still get by and keep our momentum up. On the one restart, Randall got back by me, so I slid him back and kind of went back to my old game plan. I knew we may have something for Nienhiser there if we got two clean laps. I got the start right and got into position to get around him. Luckily, we did that.

“Quincy had it dialed in tonight,” said Nienhiser of the track. “It was about how I remembered it five or ten years ago…top, bottom, middle and guys were throwing slide jobs. When the track cleans off like that, you can really put a race on for the fans. We went back to maybe fifth, and then we were sniffing for the lead, and ultimately, ended up third. I think maybe we could have had a shot at Great with some lapped traffic to make something happen. Congrats to him. This has been a fun series to run with this year, and fun getting to know some of the new drivers. I’m happy for Scott to win the owner’s title. I kind of wish I would have run the whole season, or we would have had a good run at the driver thing too.

“It was a very good season for 95% of it,” said Wehrle of his driver’s championship. “We were consistent and had a lot of good runs. Our luck caught up with us Saturday at Burlington. We got lucky at East Moline when we did a 360 spin and collected JJ Hickle. Things came full circle in Burlington. I have to thank Roger Grant for allowing us to bring his 305 car tonight. That was basically a season saver for us.”

For more information on the Sprint Invaders, visit www.SprintInvaders.net.