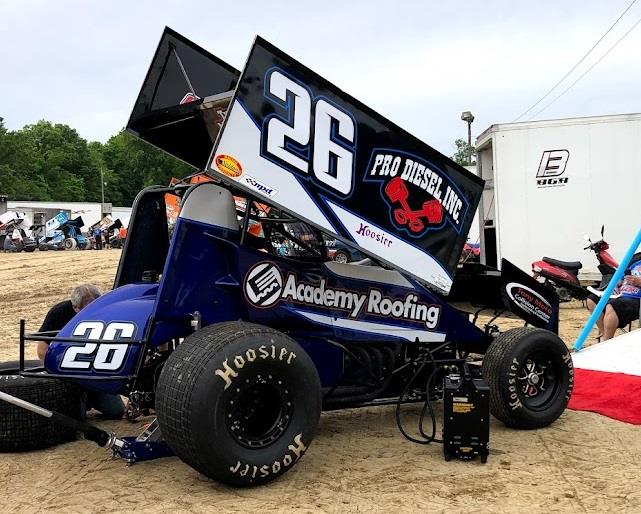 (Bill W) Dubuque, IA, July 28, 2021 – The annual trip to the Dubuque County Fair is a favorite each year for both fans and drivers. This year’s edition for the Sprint Invaders did not disappoint. Jonathan Cornell emerged victorious for the second time this season with the series aboard the Howard Law #26. The win was worth $2,000 to the Sedalia, Missouri native.

Cornell shot out to the lead in the 25-lap feature from outside row one, ahead of Paul Nieanhiser and Josh Schneiderman. Chris Martin, who had won the Dash, was up to fourth from his starting spot outside row three. The leaders were in lapped traffic by the sixth circuit, and Nienhiser was right on Cornell’s tail on the rough, banked 1/3-mile oval.

Nienhiser shot below Cornell to take the lead on lap nine. Martin was moving forward as well, taking third from Schneiderman on lap 13, and second from Cornell on lap 15. He would bobble two laps later and lose position.

Up front, Nienhiser had opened a straightaway lead by lap 17, when disaster struck the Scott Bonar #50. A broken suspension would sideline the leader. Cornell assumed the lead over Martin, Schneiderman, Kaley Gharst and Ryan Jamison.

Cornell maintained a fast pace over Martin and withstood a final caution flag flown for Colton Fisher with there to go. Martin finished second, ahead of Schneiderman and Terry McCarl, who shot from sixth to fourth on the late restart. Gharst, Jamison, hard-charger Brayden Gaylord, Tanner Gebhardt, Wyatt Wilkerson and Cody Wehrle rounded out the top ten. Cornell and Gharst won heats before Martin’s win in the Dash.

“This place is radical,” said Cornell in Victory Lane. “It’s a Fair night, it’s awesome. I thought it would be a heck of a lot slicker than it was. We’re missing a big asset in Marty Howard tonight, but I think he’s watching at home. He, Lee Nelson and Tony Moro have done a heck of a job in putting this program together. The 50 car was kind of checked out. I don’t know that we would have caught him. I got a little too conservative when I was in the lead (early). I was missing my mark a little bit and the car got free on me. We crossed first though, so here we are.”

“There was a lot of chaos out there,” said Martin. “The car was performing really well when I wasn’t trying to wreck it! The redraw after the Dash kind of put us behind the 8-ball, but I honestly thought we had a really good racecar, especially around lap 14 or 15 when we got to lapped traffic and racing really hard. It was a good effort for our team tonight, and hopefully, we can pick up the win here next year.”

“We were really good,” said Schneiderman. “Early , we just don’t have the horsepower these top three or four cars do. Our technology is a little old, but there’s nothing wrong with that. Usually you don’t need it out here. The track was very technical. That cushion was wicked, and you had to be very cautious. If I left the cushion we were in trouble, because the car was so free. All in all, it was a solid evening. I felt I was too cautious in traffic, but we need to keep getting a little better. These are new cars to me (Maxim), and (brother and owner) Jerrod (Schneiderman) is doing a great job with them.”