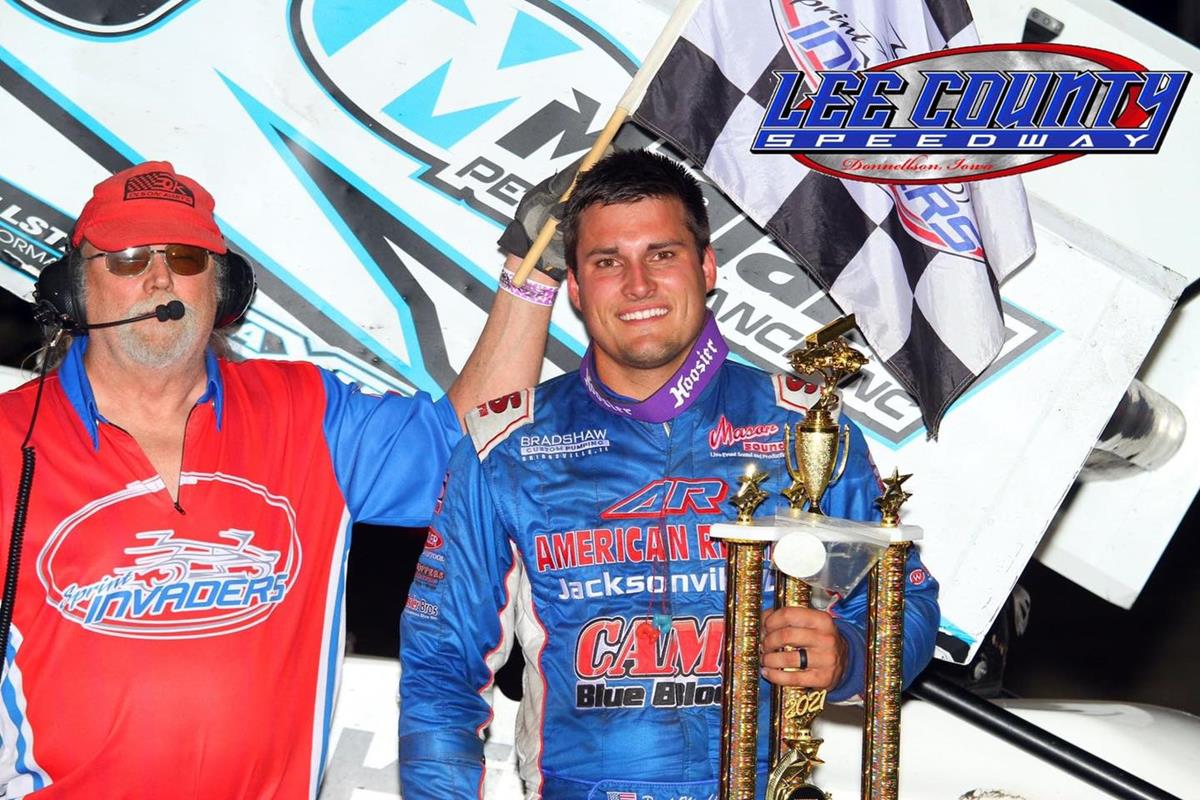 (Bill W) Donnellson, IA, August 20, 2021 – Paul Nienhiser picked up his fifth career Sprint Invaders win and second in his career at the Lee County Speedway with the Sprint Invaders Friday night. The Chapin, Illinois driver earned $2,000 for his win aboard the Scott Bonar/Midland Performance #50.

Nienhiser led from the pole early in the 25-lapper, ahead of Josh Higday and Kaley Gharst. Ryan Jamison, returning to action in his #51J, surged from fifth to third on the second lap, but Gharst recovered the spot on the next circuit.

Nienhiser opened up a good lead before entered lapped traffic on lap seven. JJ Hickle had climbed from his tenth starting spot into the top five by lap nine, when a caution was thrown for a cone knocked onto the track. Nienhiser led Higday, Gharst, Austin McCarl and Hickle back to green.

Gharst shot into second, and a lap later, Hicle had gotten by both McCarl and Gharst into the third spot. Nienhiser was back into lappers on the fourteenth lap. Hickle slid by Gharst for second on lap 16. A McCarl pass for third was negated when Evan Jones brought out a caution for a 360 spin.

McCarl would work back by Gharst for third with three to go, but Nienhiser and Hickle had checked out. Nienhiser split a pair of lappers with two to go, and though Hickle mirrored his move, he had nothing for him at the end.

Following Nienhiser, Hickle and McCarl were Gharst and Higday. Jonathan Cornell finished sixth after starting fourteenth, and Colton Fisher, Cody Wehrle, Chase Porter and hard-charger Chris Martin, who had to start at the tail after just making the call after changing a motor, completed the top ten. Gharst, Higday and Martin won heats, while McCarl won the Shake-up Dash.

“It’s always difficult to be the leader,” said Nienhiser in Victory Lane. “I’d pretty much prefer not to start on the pole. You’re setting yourself up for disappointment when the only way you can go is backwards. We had some misfortune in the Dash, but we had a new front-end in about five minutes. It’s just a pleasure to drive the 50 car. I’m giving myself a little confidence. It’s been and up and down year for me. To cap this off is pretty special. Scott’s put great cars on the racetrack for years, and I’m just lucky to be able to drive it.”

“There was a lot of good racing on a slick track there,” said Hickle. “It was just really technical, and it was fun out there racing with a lot of good guys. It’s probably the twentieth or thirtieth new track we’ve seen this year, so we have a pretty good feel. We were a little off in the heat race, but by the feature, I think we probably had the car to beat. We got to traffic at the white flag lap. If the race would have shaken out a few different ways…Paul’s a pro, we weren’t going to get him on the open track. We needed some traffic.”

The Sprint Invaders will tackle the 34 Raceway in West Burlington, Iowa on Saturday, August 21. For more information on the Sprint Invaders, visit www.SprintInvaders.com or look us up on Facebook.